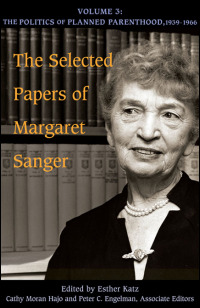 Volume III begins with the outbreak of war in Europe, Sanger's initial opposition to American entry and her worry over her two sons serving in the armed forces. The war years were quiet ones for her, as she officially retired from the Birth Control Federation of America (renamed Planned Parenthood Federation of America in 1942) and moved to Tucson to tend her ailing husband. But Sanger's continuing efforts to direct the birth control movement from afar according to her beliefs ran into opposition from BCFA leaders in New York. The divisive issues include the Negro Project, which Sanger hoped would bring birth control service to African-American women in the rural South through education undertaken by black community leaders, doctors and nurses; to clashes over Sanger's opposition to the transformation of birth control clinics into women's health and infertility centers. In the post-war years Sanger concentrated on the pursuit of her decades-long dream of finding an effective non-barrier method of birth control. This volume will trace Sanger's masterful direction of scientists, philanthropists and birth control bureaucrats to combine forces toward the development of the first birth control pill, released in 1960. The volume will conclude with Sanger's final years in which she surveyed and evaluated her life and work. In particular, her letters regarding the disposition of her papers and her correspondence with biographer Lawrence Lader provide an apt summary of her career.

This volume was published in June 2010 by the University of Illinois Press.